The Role of the Chapel

The Chapel is both the building itself and the liberal religious community who meet there.

As a heritage site, it is in the first rank, being a grade one listed building, as well as the final resting place of the famous Victorian author Elizabeth Gaskell. We are grateful to the Gaskell Society for their active interest and support. Visitors, interested in the history of Knutsford, Gaskell’s “Cranford” and the chapel, come from all over the world. We also welcome schools groups on educational visits, and small groups by appointment.

The Chapel is a cultural centre. We have hosted musical concerts and literary events and this is an important part of the chapel’s outreach. It is hoped to develop this aspect much further in future years.

It may also be described as a meeting place, where people of many different backgrounds, religions and nationalities may find a warm welcome. This is particularly evident in rites of passage. Our minister conducts quite a number of such services, especially marriages where the couple come from different faiths.

Social events play a large part in the life of the chapel, both for members and for the wider community. This aspect of chapel life is very important for us.

It is a place that seeks to be a centre for justice and social equity, mindful of our heritage in that respect and looking to a larger future, to help in our own particular sphere towards making a better world for everyone.

We are pleased that our disabled access project is now completed and so we are now fundraising to futher develop the Gaskell Exhibition and to create another exhibition based on the history of the Chapel, the people who are buried in the graveyard and the history of Unitarianism and its role today.

Our Chairman’s view on Unitarianism

Denise and Graham Birks discovered Unitarianism on a day out in Shrewsbury about 6 years ago. They are now members of Brook St Chapel, and feel that they have found their spiritual home. What follows is an extract from a talk which they gave to the congregation when the then Minister was on holiday. The talk was entitled “our journey of faith”.

Our first religious experience together was at a Pentecostal church, having been invited by friends .It was a very lively, charismatic atmosphere, and we were drawn in to this emotional experience. We continued to attend for some months, but then realised we were going because it was a good night out, and in fact we were rather dismayed to hear the continuous condemnation of other faiths. We drifted away, and did not resume any religious element to our lives for many years.

When we reached our early forties, we started to ask ourselves the “big questions of life” and once again began to look for a spiritual answer. We tried a number of churches, of various denominations, and eventually settled on a C of E evangelical church, which seemed to give us clear answers to our questions, and this time we made a thought out commitment to a faith.

However, although we attended for several years, we were never entirely comfortable there. A literal interpretation of the Bible, together with a message of exclusivity, did not sit well with us. We always knew that we would move on, but we had no idea where to.

Then one day we passed a Unitarian Chapel on a day out in Shrewsbury. It had a notice board outside which summarised Unitarianism. This is what we read:

“The Unitarian path is a liberal religious movement, rooted in the Judaeo Christian traditions, but open to insights from other world faiths, reason and science: and with a spectrum extending from liberal Christianity through to religious humanism”. When we read this for the first time, I think it was our “Eureka” moment! From there it was only a short step to Brook Street chapel. Someone once said that you don’t become a Unitarian, you just find out you have always been one!

Occasionally we have the privilege of leading services at Brook Street, and this is the message we generally seek to convey:

We would struggle with many of the doctrine and creeds of mainstream Christianity. However, we do believe that in Jesus, we see what we are called to be. We clearly believe that Christianity can still be a positive influence within Unitarianism, because there should be no expectation of anyone having to let go of their culture or heritage. Being a Unitarian Christian enables us to reflect upon these things in a more flexible and progressive way. We should look to the future, and find new ways to express our theology in a way which is more relevant to our time. Our religion needs to evolve, just as our understanding of our world and ourselves has evolved. The type of Christianity we express can appeal to those who yearn for a non-divisive religion, and should not be incompatible with others faiths. As Unitarians, it is paramount that we always display constructive tolerance and openness towards the sincerely-held beliefs of others.

How I became a Unitarian – A Personal Journey

“To begin at the beginning” wrote Dylan Thomas; but where is the beginning? Many Unitarians and Free Christians come to their faith through a long process of thought, prayer and discernment, rather than a one-off sudden decision. In my case, it was a process that stretched over many years.

Both my parents were devout, yet broad-minded, with a certain healthy scepticism. They set me on a liberal path. From early on, it seemed absurd to say that only adherents of (fill in the desired religion!) would be “saved”.

An excellent and inspiring Religious Education teacher who became a personal friend, taught me about  the 2nd Century Justin Martyr, whose teaching on the divine Logos, the  ‘Word’ led him to declare that virtuous pagans before Christ were also saved: “All truth wherever it is found, belongs to us as Christians” as one translation has it.

After a long search and exploration of various alternatives, I found the Unitarian and Free Christian churches. They had an open-ended search for truth, rooted in Christian faith and practice. They sought to study and learn from other religious traditions and faiths. Their tradition of social action and practice also greatly appealed to me.

Here was a place I could call home. It was a temple of the spirit where one could seek new insights and think new thoughts. “Where the spirit of the Lord is, there is freedom” (2 Corinthians 3.17)  It has been my privilege to be a Unitarian and Free Christian minister for nearly two decades now. I am free to look for new insights and ideas, whilst being secure in the conviction that Truth is one and God is one. I am profoundly thankful for that freedom. 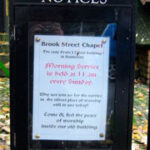